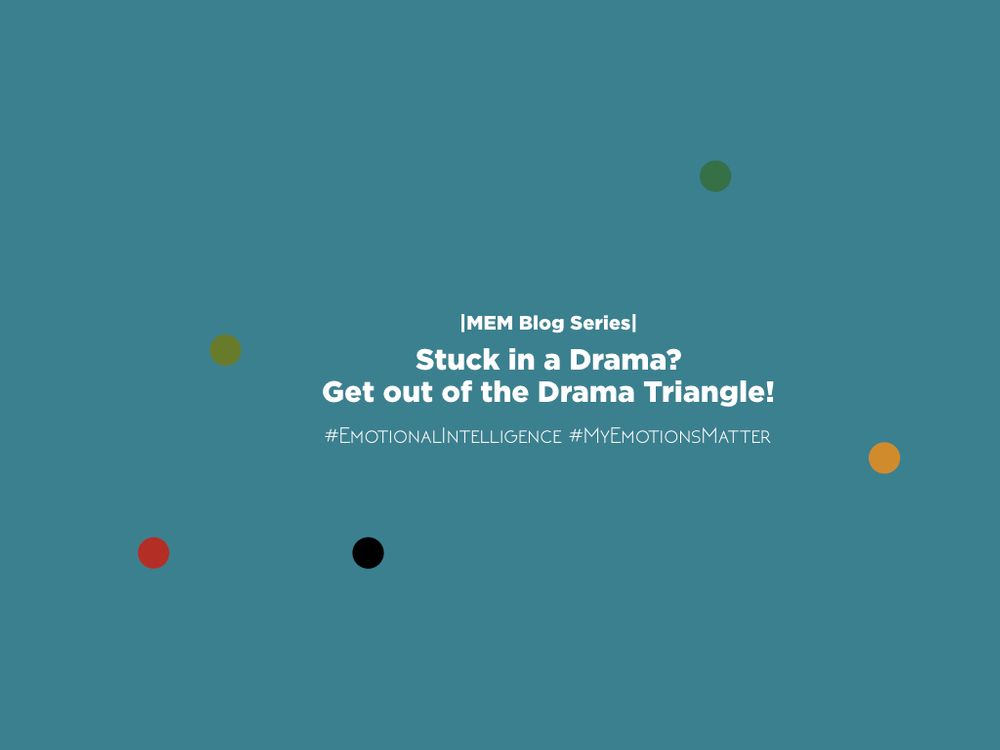 If you look up the word ‘Drama’ in the dictionary, you will see this definition:

a situation made more complicated or worse than it should be; spiteful interpersonal maneuvering.

Although most of us would say the only drama we like are the ones we see in the movies, we often get entangled in unnecessary conflicts that feel disempowering. With our work at My Emotions Matter, we are interested in the question: how do we shift from disconnection to connection? We have come to realize that the starting point of this shift is the awareness of what causes us to remain in the state of disconnectedness.

One useful framework that can help us better understand why we get entangled in unnecessary drama in our interpersonal relationships is the Karpman Drama Triangle.

Developed by Stephen Karpman in 1968, the Drama Triangle starts by assuming that, at least some of the time, we’re playing less-than-ideal versions of ourselves with most of the people with whom we interact.

When this happens, Karpman says, we’re bouncing around between three archetypal roles—Victim, Villain and Hero—each one as unhelpful and dysfunctional as the other. As you read the descriptions of each role below, do two things: bring to mind someone who’s particularly adept at each role, and bring to mind the circumstances in which you most commonly play each role.

The Victim: The victim’s position is: I have it worse. My life is hard- things don’t work in my favor. Yes, there are times when things don’t go our way. But the victim considers themselves as inferior than others and does not want to make the effort to change their situation. Why? Because in their eyes, they are faultless. The fault is someone else’s- other people, circumstances or sometimes even the world itself is out to make their life miserable. The advantage of playing the victim card is that you don’t have to take responsibility for the problems you find yourself in. Someone else will take over your responsibilities (read more below). However, the downside to playing this role is that you constantly feel ashamed and feel stuck with a sense of uselessness.

The Hero: There is nothing wrong with helping others but if you help others in a way that makes both your own life and other’s lives difficult, then there is a problem. The hero is guilty of just that. Although well intentioned, the hero looks for temporary relief to provide to the victim, thereby confirming the victim’s position. They make the victim dependent on them and as a result feel overburdened after a while. In trying to overcome their feelings of guilt for seeing the victim suffer, the hero forgets their own responsibilities. Rushing to offer help, giving unsolicited advice, making the problem about them, etc. are all forms of wanting to ‘rescue’ others regardless of whether a help has been asked or not.

The Villain: The villain is someone who is not afraid to speak their mind- often at the expense of the other person’s feelings. A villain’s position is that of a superior, who is struggling because those around them are inferior. They are quick to blame, judge, criticize; thereby alienating those around them. The problem with playing this role is that nobody likes a bully. Soon enough, villains find themselves isolated because of trust issues.

Could you think of someone while reading all three archetypes? Did you also have in mind situations in which you commonly play these roles?

We all play the three roles. It is just a matter of identifying where we are at any given situation. A helpful concept to help us become self-aware is the ‘starting gate’- which means identifying our entry role whenever things don’t go our way. Once we play our default role, however, we are likely to switch from one role to the other.

Me [shouty]: This room setup is all wrong! I sent through my demands of how I want this; how hard is it just to set up the room as requested? (Villain)

Client [whiny]: I sent the setup sheet to the logistics people, but it’s really hard to get them to respond and I’ve had to organize this whole conference by myself without any support and… (Victim)

Me [resigned]: Look, don’t worry about it, I’ll just rearrange the room by myself and get the tech set up. (Hero)

Client [frustrated]: This is just typical speakers like you; we’re paying you too much already and you have to have everything “just so” and then you take over any time you’re not happy. (Villain)

Me [whiny]: I’m just trying to make sure my session’s a good one; no one understands how hard it is to get a room set up the right way, and then as soon as you try, everyone hates you. (Victim) and so on.

Enough drama! Can we get out of the Drama Triangle?
Karpman suggests three things:

As someone who teaches these concepts, I’m aware of how we keep coming back into the drama triangle despite learning about it. However, understanding the concept, our default role and reminding ourselves of the consequences of each role can help us act with intention and shift from conflict to connection.