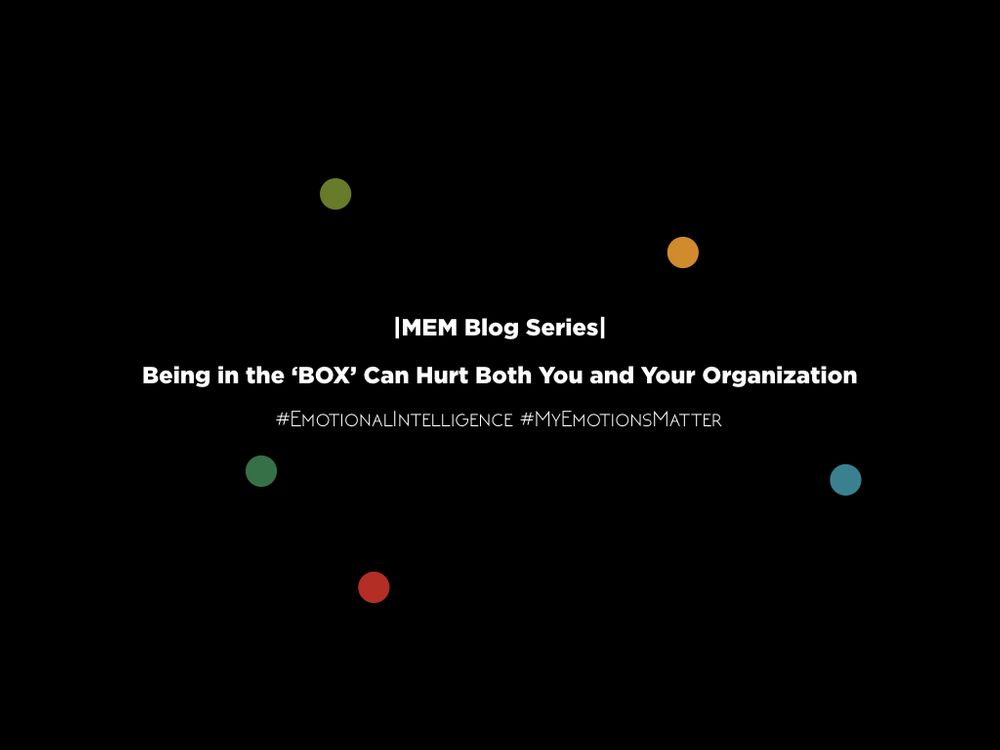 If we understand the concept of self-deception and the two mindsets-inward and outward, we know that an 'inward mindset' does us no good. When we operate with such a mindset, we see people as objects who can either help us, hurt us or are downright irrelevant. A counter-intuitive thought process to this could be that we're naturally compassionate beings, and we're above the propensity to get in THE BOX toward others. But, let's think and think through it well. Whether we're naturally compassionate beings or not is a subject of debate, but are we exempt from being in the box toward others? The answer to this question runs deeper than superficially answering with a 'no' based on what I've experienced so far. There are layers to the metaphorical BOX of self-deception and the consequential inward mindset. Wondering what those layers are? Let's explore.

As researched by the Arbinger Institute, there are four types of boxes or justification styles with which we can operate. Each one of them encourages different thought-processes and subsequent emotional experiences in our interpersonal relationships. In this write-up, we will explore how they can do a great disservice to ourselves and our organization if we aren't well-aware of it.

In this box, we consider ourselves superior while we look at others as inferior beings. We think we're right, while everyone else is wrong. We assign great importance to ourselves, but other people are irrelevant to us. Now, I'm sure you're already thinking of instances and ways in which this can create problems for us in professional relationships. Let's look at an example to understand the same. Let's say you and your colleague are working on a project. You have some resources with you from your previous research that you know can lead to positive outcomes for the project. But, you choose to keep it to yourself. When the project fails, you blame your colleague for not being keen or capable enough to do their best while making yourself the one who did the most to save the project. You might think you hit a winning strike, but don't you think you're the one in the loss here because you're sabotaging your collaboration skills while negatively impacting the organization's results?

Have you ever experienced situations wherein you felt that you're capable of doing certain things, but at the same time, you're not valued, appreciated or treated well enough? If you have, I know I have, then this box is all about that. In this box, we consider ourselves unappreciated gems, and other people as ungrateful, mistreating, and disrespectful beings. Let's understand this better with an example. Say you're a part of the group project which one of your colleagues is leading. You have some ideas that can help the project. However, each time you think your colleagues come up with better ones, you back out from speaking your mind. And then, you go into a spiral of blaming your teammates for not caring enough to listen to your ideas, for not bothering about your opinions, for not valuing you as much as they should. Who's the one in a loss here, again? You know the answer, right? Imagine an organization where everyone acted in such an entitled way.

Do you know what's common between us all, even if we're different beings? It's that we all want others to see us in a particular way or the other- helpful, generous, friendly, assertive, resourceful, confident, capable, and many more. While there's no harm in creating certain perceptions of ourselves, can you think of some ways in which this can go against us? Let's say you're assigned to review your colleague's work performance for the last six months as a part of your organization's 360-degree feedback process. You know that this colleague, who is also your close friend, hasn't done their best in the past few months. Now, you who consider yourself to be helpful are under pressure to make a decision. If you're operating from the Need-To-Be-Seen-As Box, you will probably report an exaggerated picture of your friend's performance in an attempt to save them. Your need to be seen as a helpful person here actually stops you from helping your friend (who could grow from the feedback) and supervisor (who trusts you with your words but in vain). Not unexpectedly, this would have a long-term negative impact on your department.

Think of a person you know who often thinks that their fate is against them, that they're not enough, capable, or confident as other people. At the same time, this person might think they're disadvantaged while other people have it easy, that they're more privileged and disadvantaged. I'm sure you know at least one person who is like this. Whoever this person is, s/he is in the Worse-Than Box. Let's say the person in this box is you. You've been working on pitching an idea to your boss for a long time. As a not-so-very confident person, you've gathered a lot of courage to take this step and approach this boss. After the pitch, the boss appreciates your effort but gives you detailed feedback on what you could do better. What would be an obvious response being in the box? You'll feel resentful for trying to come out of your comfort zone in the first place, wouldn't you? You'll be justified to go back to not taking steps to grow because you think you don't have it in you. Feelings of jealousy, helplessness, and bitterness would follow.

While we all juggle between these four boxes, we could be easily triggered to get in one of these in particular situations. Our natural tendency could be getting in the Need-To-Be-Seen-As Box toward our colleagues, Better-Than Box toward our subordinates, and Worse-Than or the I-Deserve Box toward our supervisors. We won't know the impact the boxes have on ourselves and our organization if we don't know we get in these boxes, to begin with. The bottom line is- no matter which BOX we talk about, it's always going to confine us. It's up to us to stay either in 'THE BOX'- where it's dark, and we can find plenty of reasons not to change our toxic patterns or, to come out of it to see other people as people and to become better versions of ourselves.