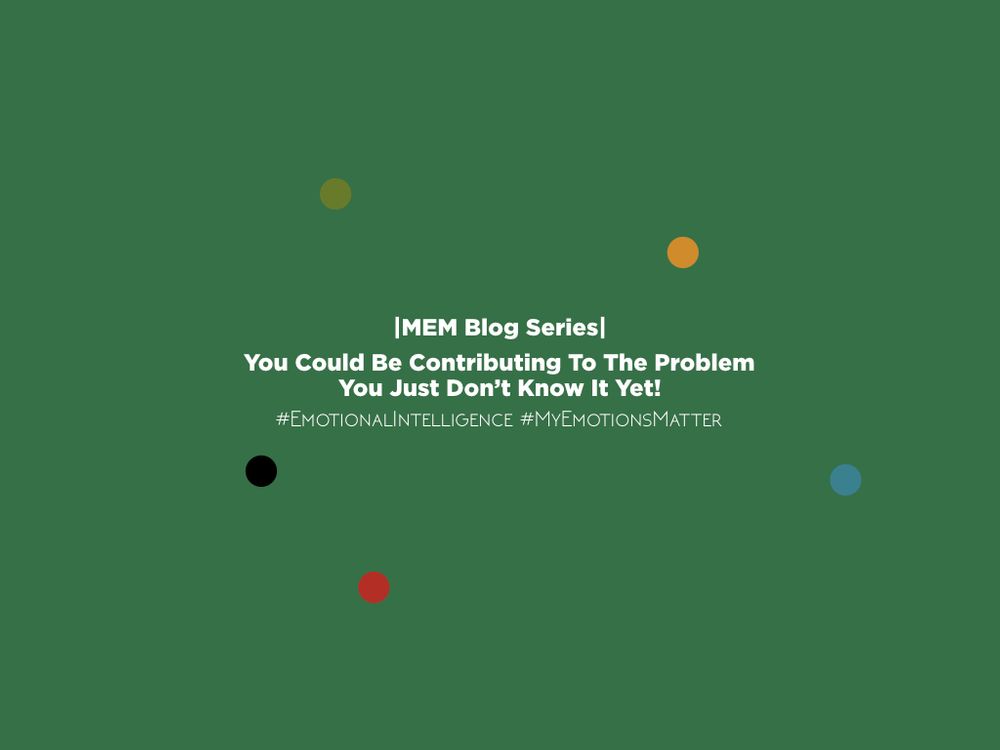 "Why are you convincing me to be okay? Go and tell him. I am not problematic- he is." I am sure you've said something similar during a disagreement or conflict with someone when a third person might have tried to reorient things in between. Even if you did not have anyone to sort the situation in between, you might have pretty much said it to yourself, "I don't have a problem, he does; she does; they do." I remember saying that numerous times- sometimes in my head, sometimes out loud.

There's a great possibility that you might find this write-up is about you. But, here's the catch: it's about every one of us reading this. It's about me- who's writing this.

Most of the time in our interpersonal relationships, we complain about how the other person isn't doing enough to understand us and how they make our lives problematic. We make the other people villains- to make it seem like we're the poor ones. Parents occasionally find their kids to be troublemakers and kids consider their parents as villains. Friends complain about their fellows not caring about them. Partners find each other to be unloving. Leaders think their employees are only bothered about themselves, and employees consider that all their leaders care about is their company's bottom-line and not them. Do you see a pattern to all this?

Never once does it occur to us that we could be contributing to the same problems about which we complain. This phenomenon is what we call 'the blindness paradox' or 'self-deception.' Self-deception is the problem of not knowing that we have a problem. I'm sure we've heard the cliche, "It takes two for a tango!" How does it ring true to this discussion? Conflicts, miscommunication, misunderstanding, and low trust- are common problems in our interpersonal relationships due to which we go on to blame or point fingers at others. But, none of these problems occur in isolation. It takes at least two people to engage in these sorts of issues. But, while we so easily blame, judge, or criticize other people, we don't consider how our actions could be inviting what we don't appreciate from others.

How can this create problems for us? As long as we keep thinking the problem is with the other person, we are likely to propose solutions that aren't inclusive and sustainable. What do I mean by that? Let's explore it with an example. Take the case of the eager supervisor who is quite passionate about his work and keeps sharing new ideas with his colleagues now and then. His colleagues also enjoy their roles, but they fall short of their supervisor's enthusiasm and often do not get enough space to share what they think. Without addressing this possibility, the supervisor thinks that his colleagues are probably not keen on doing their best. What do you think might follow?

Even if the supervisor changes his behavior to accommodate for his colleagues’ perspectives, it still won’t be enough for the supervisor. Why? The reason is that the problem never was that the colleagues didn't have ideas to share or didn't look to do their best. The supervisor's mindset was largely inward toward them. It was, in fact, the supervisor who didn't allow others the space to chime in, in the keenness to share his own ideas. The supervisor will always have problems with his colleagues, because for him, others are inadequate and incompetent. Hence, there are chances that even if he has new people joining in, he would question them the same after some time has passed. Never will it once occur to him that he could be contributing to the problem about which he so often complains.

Self-deception is the reason why we get in 'THE BOX' and start operating with an inward mindset toward other people. The underlying thought of an inward mindset is that: I don't have a problem; the others do. Driven by this thought-process, we start seeing the other people as objects- as vehicles to further our own goals, as irrelevancies to ignore, and as obstacles to overcome. It doesn't occur to us to see other people as people- people with similar if not the same needs, objectives, and challenges.

Had the eager supervisor taken a step back to reflect on his actions, he might have realized how he contributed to the same problem which made him so frustrated. Self-deception makes us ignorant at the least and delusional at the worst. When we enter the metaphorical ‘BOX’ of self-deception, all we can see is problems with others- while we are oblivious to the impact of our actions. When we deceive ourselves, we stop seeing the world around us. Our world then consists only of ourselves. In this world, others are merely objects- that either help us, hurt or, or aren’t relevant to us. Therefore, the solutions that we propose to resolve situations may seem convenient for ourselves but not to others and can, in fact, create more problems in our interpersonal relationships.

Along with Sagar Satyal