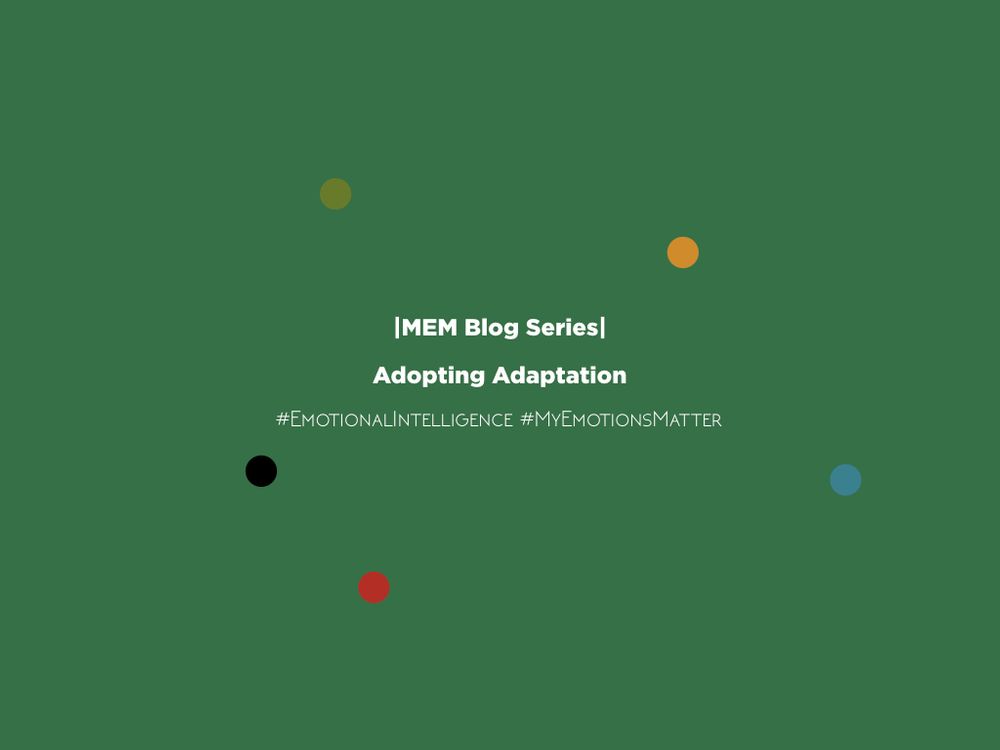 While the thought of a new experience might seem adventurous and fun from a superficial level, it has its own set of challenges too. The major challenge that we face when getting out of our comfort zone is the demand to change our ways and to adapt flexibly according to the needs of the situation.

In the process of adaptation, we have to let go of our old patterns and habits and embrace new ones and this whole process isn’t a bed full of roses. Yet, this process is one of the most important as only a person who can adapt very well can deal with changes effectively.

As stated by the writer Nicholas Sparks in his novel ‘The Notebook’, “A person can get used to anything if given enough time.” Adaptability is a natural quality we human beings have learned for survival. All of us can adapt; the only concern with adaptation is the time it takes.  While some people take a lot of time to deal with changes, some others can do it very quickly. In the research that we conducted from My Emotions Matter in 2019, we came to find out that 71.4% of our respondents found it easy to adapt to changing situations and environments.

In fact, one of our male entrepreneurs had a very deep thought about adaptation which left me completely intrigued. He stated how we humans are continuously changing ourselves depending on the situation we are in. He stated how we tend to be different or act differently in different contexts and situations. This is something which is very true in my case as well. I often feel confused when contemplating the question about ‘Who I really am?’ because I tend to exhibit different behaviors depending on the situation I am in.

While we humans might adapt ourselves according to different contexts naturally, there are some situations in which a change occurs suddenly and in such situations, we can find ourselves completely confused and overwhelmed about how to adapt.

In the case of one of our school leader respondents, she stated how she was assigned as the Principal of the pre-school wing earlier. And then because of high employee turnover in the school, she was given the responsibility of handling both the pre-school wing and being positioned as the Vice-Principal of the school wing. She stated how she initially suffered because of the sudden addition to her responsibilities. Even her work started getting hampered due to the pressure she had upon her.

Her decreasing work performance got her supervisor worried and after her supervisor expressed concerns to her, she took out time to divide her time between both the wings which led her work to become more manageable and she was thus able to handle the situation better.

In the case of the school leader, we can see that she had initially failed in the process of adaptation. We need to understand that ‘failure’ is the keyword that accompanies adaptation. When dealing with any kind of change, we are most likely to fail in the beginning and it is natural.

In the case of my friend, after living with her partner in the same country for more than three years, she had suddenly gotten into a long-distance relationship. The process of change seemed daunting to her and initially, she wasn’t even supportive of her partner moving abroad for education.

Keeping in mind that failure is going to be a part of the journey, she kept on dealing with the change and now it has been more than two years of her long-distance and she has learned to navigate her relationship really well.

Though the process of change was so daunting and challenging, what kept my friend going was the support she received from her partner. This incident very well taught me how important it is to have a good support system when going through the process of adaptation.

Also, I noticed the importance of support system when trying to strike a balance between personal and professional life. While interviewing one of the entrepreneur respondents in our research, she stated how when dealing with work she needs to adapt to different situations quickly. She needs to be professional in professional settings and needs to show her human side to her employees when trying to connect with them on an emotional level.

This has been something which I have experienced too especially when doing group assignments in college. Assignments required me to be professional and assertive with my friends whereas during other times I used to have fun with my friends unhesitantly. Yet, there were times when adapting according to the changing roles became very difficult. The reason why my friendship has remained intact despite some rocky situations while doing group assignments has been because of the strong support system that I have.

According to an article written by Kendra Cherry on ‘How Social Support Contributes to Psychological Health’, social support helps people feel more confident about their ability to deal with stress that comes in life.

One very interesting inference was given in terms of coexistence by one of our female respondents. She belongs to the Dalit community. Because of some superstitious beliefs, one priest that had come to her home for a ritual denied accepting any offerings other than the monetary ones. Our female respondent found this caste discrimination to be extremely disrespectful. Yet, she tried to understand the priest’s situation and took into consideration his perspective and instead of reacting she chose to remain quiet. This is a clear example of adapting to situations through co-existence.

Though it might seem as though the female respondent didn’t stay true to her values by not standing up for herself, when we dig deeper we will realize that she exhibited the quality that the most adaptable people in the world pose. According to an article written by Jeff Boss, the author of the book ‘Navigating Chaos: How to Find Certainty in Uncertain Situations’ adaptable people don’t whine. In the above situation, the female respondent knew that nothing she would say or do would potentially have the power to change the priest’s perspective, so instead of whining about it, she chose to keep shut, adapt and move on!

In a world where everything remains dynamic and situations change very quickly, the power of adaptation is an important power we humans possess. This is one quality that can help us survive and make a living in situations we never could have imagined. This is a skill that we humans have been using since the stone age and that we will have to keep on using in the years to come if we truly want to live a life full of experiences and continue surviving in this beautiful world!

To maintain confidentiality and ethics of privacy in research, we are not revealing the names of any of the respondents in the research article.