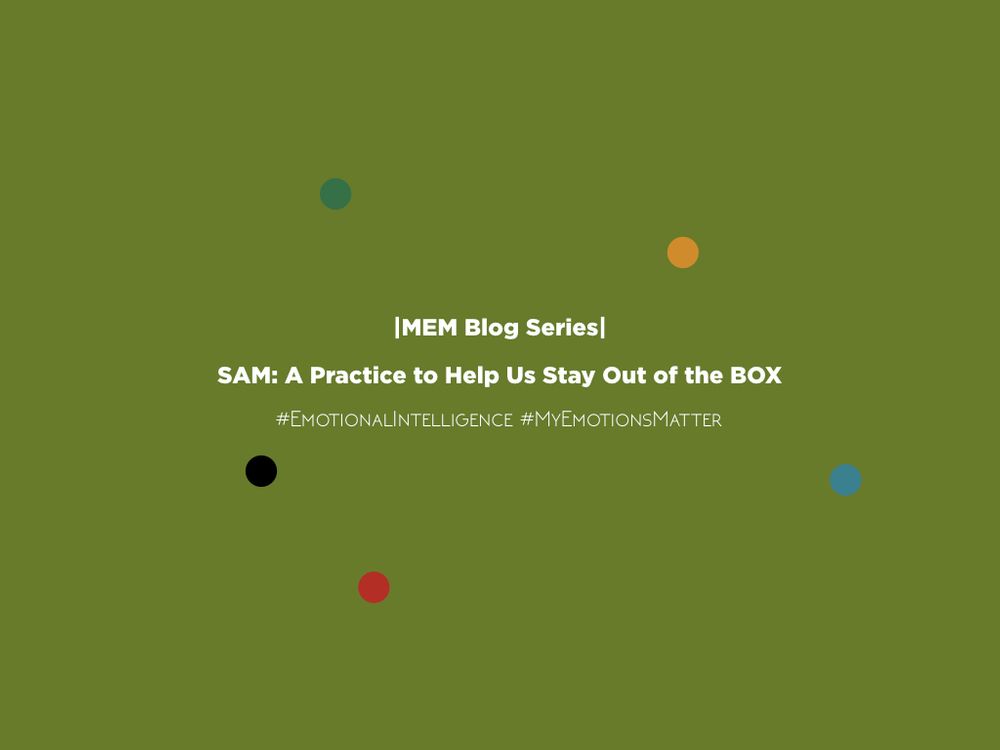 What can help us come out of THE BOX of the Inward Mindset and apply an Outward Mindset is our Self-Awareness. When we stop looking at how other people are making our lives difficult, how they're "that bad person" and we're the "poor ones," and focus on our efforts to apply the Outward Mindset, that is all we need to help us stay out of THE BOX.

Of course, it is easier said than done, but one practice can help us stay committed to finding our way to an Outward Mindset. We call it 'SAM'- an acronym for 'See people,' 'Adjust efforts,' and 'Measure your impact.'

See people. Seeing other people as people means considering their needs, objectives, and challenges. It means being curious about what makes them who they are and what matters to them.

Adjust efforts. Adjusting efforts means directing our actions toward being more helpful to others after considering their needs, objectives, and challenges.

Measure your impact. Once we've adjusted our actions toward helping others, it matters that we know whether our actions were helpful to the other person. It is what measuring our impact means.

Despite our intention to be helpful, if we find out that our efforts were not as impactful for the other person as we would have liked, it means we might need to adjust our actions again. If our efforts are helpful, followed by that, we continue doing so while periodically checking in those we're trying to help to ensure we have a positive impact on them.

How can we apply SAM in our daily lives? Let's look into some real-life examples to learn the same.

Trisha [name changed], a supervisor leading a team of 9, was considered an unapproachable person by her colleagues. She would come to the office, do her work, and go back home. Her colleagues would greet her in the mornings and when they left for home at the end of the day, but she wouldn't even notice. She wasn't aware of how her actions were creating a barrier for her colleagues, so much so that they felt afraid before approaching her to discuss project ideas and the progress of the ongoing ones. When Trisha saw delays and bottlenecks, she would think her colleagues were incompetent and didn't care about their work.

This cycle continued until Trisha learned about Outward Mindset and came to terms with her blindspots. When she learned that her actions were creating problems for her colleagues, she became aware of her self-deception and applied SAM to become helpful to them.

See people. She came to terms with her colleagues' needs for connection, clarity, and cohesion. She understood that her distant behavior might have been causing them difficulties, and perhaps they might also be concerned about not getting a reply to their greetings.

Adjust efforts. The first effort that Trisha made was to reply to her colleagues' greetings. When some of them didn't wish her first, thinking she wouldn't respond anyway, she made sure to greet them. Trisha also talked to her colleagues about how their work and individual projects were going. She would offer to help them.

Measure your impact. Trisha held individual and group check-in meetings periodically with her team to learn if she had been helpful to them. Most of her team members reported having felt at ease with her. In fact, hearing back a simple ‘Good Morning’ made the colleagues feel that she acknowledged their presence.

Deep [name changed], an entrepreneur, wasn't spending enough time with their partner. Even after coming home from work, he would spend most of his time on the laptop. It bothered Deep's partner a lot. She was hoping they would have more time together during the lockdown, but he got busier. When he got some time off work, he would try to talk to his partner, but she would either not respond or become passive. It would get on Deep's nerves, and he would make comments like, "I am here, and I am talking to you. What is it that you want now?"

Had things continued that way, it would have impacted their relationship. Thankfully Deep learned about Outward Mindset principles through a friend. As a result, he realized how he was contributing to inviting alienation and defensiveness in his relationship.

See people. Deep started seeing that his partner needed closeness and companionship, which had been missing from their relationship. He realized that while he expected his partner to be there for him after getting off work, he wasn't around for her when she needed him in recent times.

Adjust efforts. Deep had a conversation with his partner about what she expected from him and also shared his expectations. They both agreed to spend dinner time together no matter how busy they both would be.

Measure your impact. Deep checked in with his partner a few weeks down the line to learn if she felt connected to him than before. She appreciated his efforts but mentioned how they still weren't spending enough quality time together as partners.

After learning that, Deep deep adjusted his efforts further and intentionally started following work-free weekends. He and his partner would watch movies, read to each other, binge on their favorite food, have conversations, and even go for walks together during the weekends. They found more time for each other than before. They got to know each other better, and their relationship improved as a result.

Binit [name changed], a high school teacher, had received complaints in the previous year that their class was confusing and boring. After taking the feedback personally, they lashed out at students often, which made matters worse. Binit even took extra classes in the school. They wanted to prove that the problem lay in the students and not in how Binit took the classes. As a result, the students grew more resentful and defensive, and Binit grew more punitive and aggressive.

Things began to change when the school introduced Outward Mindset sessions for teachers. It was an eye-opening experience for Binit. They realized that they were contributing to the behavior of students about which they had been complaining the most.

See people. Binit realized that they made the students' life difficult instead of taking the students' feedback positively and making the classroom experience engaging and fun. As a result, the students felt more disconnected from Binit.

Adjust efforts. Binit started to dedicate 5-10 minutes in each class to check in with students. They would ask the students what was enjoyable and what was challenging. They also took monthly feedback from the students regarding the course and the classes.

Measure your impact. Binit made sure to have brief conversations with some students at the end of classes to know if the classroom experience had improved at all. He learned that his efforts had made students feel more connected and with him cared for.

From the stories we discussed, it might seem that behavior change helps us contribute to meaningful experiences in relationships. What we need to remember at all times is that no change in behavior can help us get the desired results that we wish to have if we still have an Inward Mindset. The first step is to come out of THE BOX of Inward Mindset, only then 'SAM' can help us 'stay out of THE BOX.'