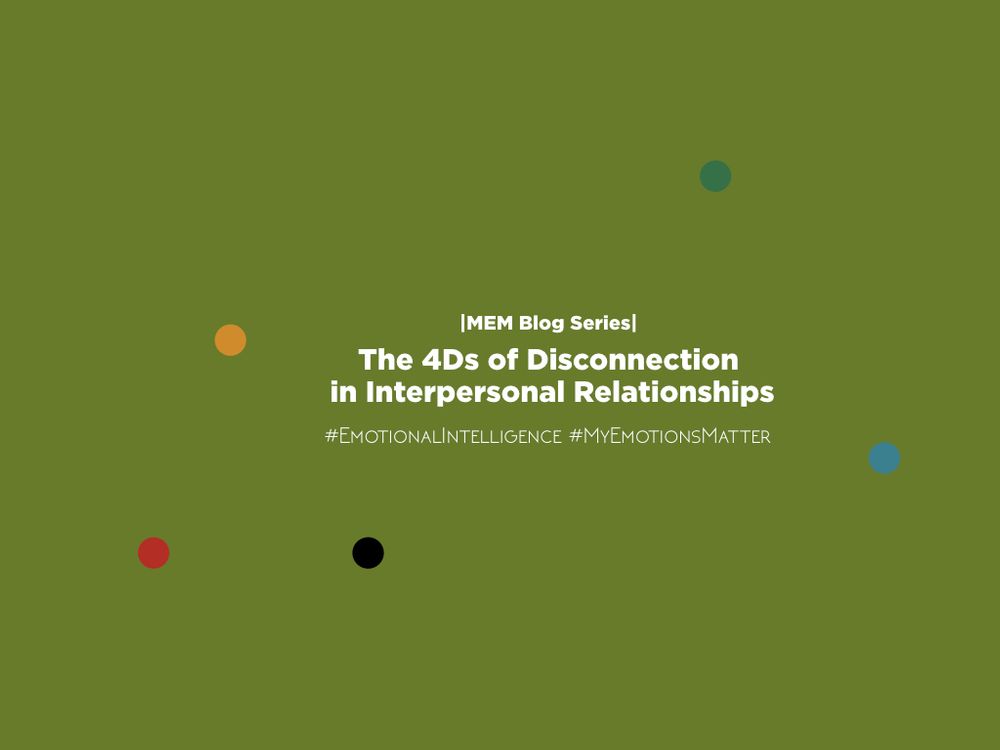 Have you ever wondered what’s more fragile than life itself? I ascertain it to be the bonds of interpersonal relationships that we nurture in our lives. Our relationships shape us—they make us as well as break us. We can’t deny the power of relationships in any way possible. However, the question often boils down to whether we’re able to manage our relationships well or not.

Chances are we might have felt disconnected even in the healthiest of our relationships. Sometimes our efforts to understand others’ needs and communicate our own doesn’t result in the best of outcomes. It’s no one’s fault because we won’t intentionally treat others the way we wouldn’t like others to treat us. However, we unintentionally or let’s rather say automatically often engage in ways that cause us to disconnect from each other.

Lucy Leu developed the concept ‘4Ds of Disconnection,’ which explains four ways in which we disconnect from each other in our interpersonal relationships. Let’s understand each of these disconnecting factors and the impact that they can have on our well-being as well as on the way we treat other people in our lives.

In our day-to-day interactions, it’s easy for us ‘diagnose’ other people – meaning we find it convenient to blame, criticize, and judge instead of noticing how their actions affected us and how we feel about the same. One of the ‘4Ds of Disconnection’ is ‘Diagnosis,’ which can cause defensiveness and discord in our interpersonal relationships. Who likes to be blamed, judged, or criticized after all?

Let’s take my own experience as an example. I have always been an introverted individual, and I prefer more one/one conversations and interaction with a closer group of people instead of going to parties and gatherings. Some of my relatives take this reality with a pinch of salt. I remember this one time I went to a family gathering a few years ago when one of my relatives told me straight to my face, “You’re such a loner!” This comment became my self-fulfilling prophecy of not going to gatherings any further.

We’re readily subject to being diagnosed in different kinds of social contexts— whether it may be commenting on someone’s weight the moment we meet them or judging someone based on two or three interactions we’ve had with them. Even in my example, you might have noticed how diagnosis pushes people away instead of making them more inclined toward what we want from them.

‘Denial of Responsibility’ is another disconnecting factor in interpersonal relationships. When we deny our responsibility, we blame others for our choices and actions. We tend to take the ‘anyone but me’ approach. For example, we might say, “It is because you were not listening that I had to raise my voice!” “You make me feel alone.” “I have trust issues because you never tell me what you are up to.” In all of these expressions, if you notice, I, as a speaker, am not acknowledging my choices. I’m instead pointing at others, making them feel guilty, and blaming them for what they did or did not do. Denial of responsibility, therefore, bars us from accepting that we have a part to play in situations that we only blame others for arising.

A ‘deserve-oriented’ approach is also what disconnects us from each other in our interpersonal relationships. Through this approach, we measure other people’s actions and behavior as to whether we think they deserve reward or punishment. I’m sure there have been times when we’ve wanted things to go well for someone, and it is because we think they deserve the best. It may be because they’re close to us, they’ve done something for us, we’re happy for them or, simply because they matter. On the contrary, I’m sure we’ve all wished some people in our lives to screw up and face negative consequences for what we think they did wrong, as inconsiderate it might sound (of their needs, hopes, and concerns). We’ve all been there and done that, haven’t we? What we need to ask ourselves is whether such practices are helping us. Are we the judge of other people? If we aren’t, shouldn’t we direct our efforts toward genuinely connecting with others and forming healthy relationships with them?

What’s worse, we even make ‘demands’ in our relationships that imply the threat of punishment for others if they don’t comply with what we ask them to do. As a component of the ‘4Ds of Disconnection,’ demands make us force other people to comply with us. If they disagree, we either try to make them guilty about their choice or, we criticize and judge them for not complying with what we asked of them. You might have noticed that when we make demands, we might not necessarily threaten others with physical punishment, which is out of the question. Behaviors like laying guilt, passing judgments, and criticizing others for their choice are part of the ‘emotional punishment’ of making demands.

Consider a couple who have been planning to go on a trip after the ease in lockdown. The partner who came up with the trip idea is very excited. The other is wrapping is his head around the work he needs to get done, now that his office resumed after months of hiatus. His concern may be to get things started at work, but if his partner is not considerate of this fact, she would not be ready to hear a ‘no’ from him. When he would ask her to reschedule the trip, she would probably try to make him feel guilty. “I thought spending quality time with me meant something to you!” “I was getting excited in vain; you surely have more important things to take care of!” If not through guilt, she would subject him to criticism or judgment to make him comply with what she needs. “You worry about all other things in your life, but I am nowhere in it.” “You’re such a selfish person!”

Diagnosis, denial of responsibility, deserve, and demands are life-alienating forms of disconnecting factors in interpersonal relationships. While we can’t escape from other people’s unconscious disconnecting behaviors, we can, at best, try not to reciprocate them in our interpersonal relationships. It’s easy to point fingers at others when they fall into the trap of the ‘4Ds of Disconnection,’ but we should also keep a check of when we do the same. Only when we are aware of these kinds of behaviors can we manage them well.