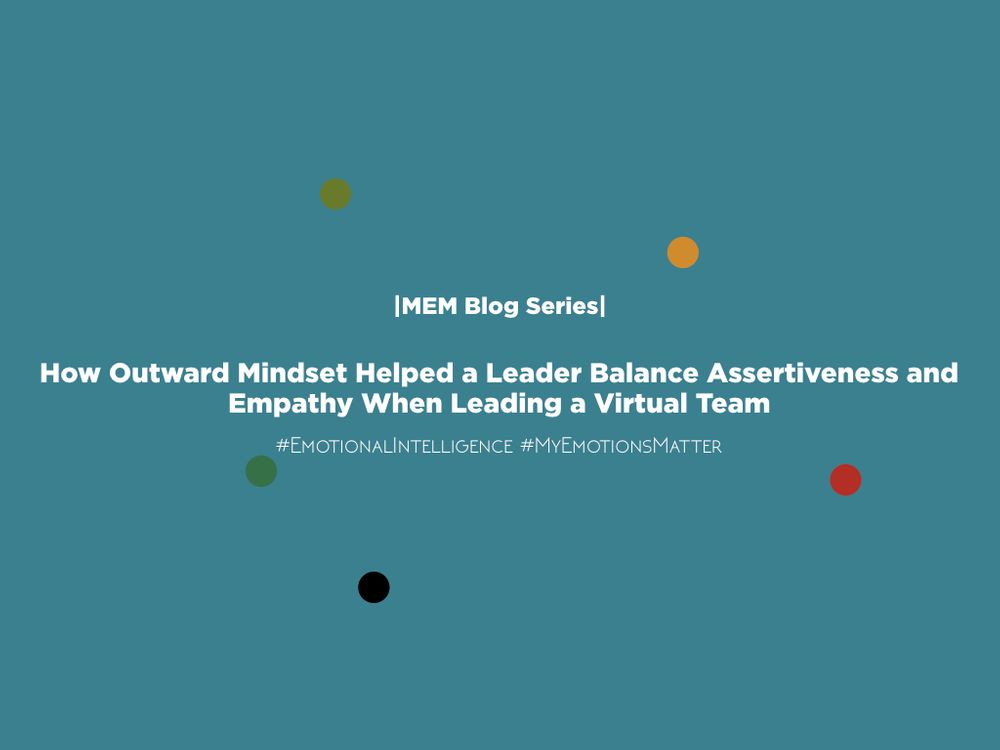 Leaders are responsible for leading their teams to attain organizational goals. Since teams comprise individuals with different perceptions, backgrounds, and thought processes, team leaders are under pressure to remain assertive in the pursuit of those goals. Sometimes, when employees do not work in alignment with how the organization wants them to work, it is easy to slip off into a tendency of looking at employees in a negative light. This sort of approach can guide leaders into a narrow-mindset whereby they forget to see that their employees are humans who have their own set of needs, objectives and challenges. This can create a gap in shared understanding between team members, thereby affecting morale and eventually, results. Balancing the act of being an assertive organizational leader while also being empathetic towards employees’ needs is thus a delicate art that defines how effective an organization’s leadership is.

At My Emotions Matter, we are alive to the challenges of working in teams. Understanding feelings, talking about feelings, and managing feelings- are among the greatest challenges of being human. If not managed well, emotions either leak or burst and they contaminate communication. Eventually this determines how well individuals within teams can work together for the larger benefit of the whole team. The skill to manage our emotions becomes further important when working in virtual teams because any form of miscommunication or distrust in a virtual team could negatively affect the morale of remote employees drastically. This could lead to an organization being pushed further away from it’s goals.

Keeping this in mind, we offer a 10-hour training course for organizations called ‘Emotional Intelligence Mindset: Getting out of the Box’ that helps leaders and employees fundamentally shift the ways in which they relate with other people in their teams. Inspired by the principles developed over forty years of research on human relationships by the Arbinger Institute, our sessions, unlike most other trainings that focus on behavioral training, focus on changing mindset. We do this because we strongly believe that what we feel about others on the inside is what drives our behavior toward them on the outside. Until and unless we work on getting our mindset right, any change in behavior will not be sustainable. For example, if we believe that a colleague of ours is someone who really makes our work life difficult, no matter what kind of changes we bring in our behavior, we will always communicate our annoyance at the person through our body language. Our tolerance level therefore will be naturally low for such colleagues. The reason behind this is that our belief system is anchored towards the thoughts that the colleague isn’t good enough. Until and unless we change our belief system and start to believe that the colleague has a positive side to them too, no matter what kind of behavioral training we take, they will do little to improve our relationship. Thus, we believe that any change only becomes sustainable once we can change our mindset.

We partnered with Reduct Nepal to provide our 10-hour Emotional Intelligence Mindset course to their team. Our objective was to introduce the concept of the two mindsets: a self-focused Inward Mindset and an impact-focused Outward Mindset and help participants experience the impact of the two mindsets on our personal and professional relationships. One of our session participants, Ms. Dilasha Shrestha, who is the User Experience Researcher at Reduct Nepal stated, “I was a self-aware person earlier too and through self-awareness I had already taken the first step towards being emotionally intelligent and empathetic to my surroundings. However, earlier my focus was on changing my behavior with the hope that the outcomes would change. For instance, if I would get angry, I would tell myself I would calm down, take some space and then address the issue at hand with a calmer mind. But even while practicing this, I wouldn’t be fully satisfied because a change in my mindset had not occurred and there were negative thoughts breeding inside my mind. A change in the behavior is basically like a temporary bandage being pasted on a wound but a change in the mindset is what is required for complete healing. For any change to be sustainable, it has to come from a change in our thoughts.”

Change in mindset takes place when we start to see others around us as people who have their own needs, objectives and challenges. In an organization too, employees are not just vehicles to fulfill organizational goals and objectives but also humans with their own needs, hopes and concerns. However, given that COVID-19 has forced all of us to work virtually, and human interaction has become limited to screens, it can further limit our ability to see our colleagues as humans who have their own set of needs in the context of their personal lives too.

For instance, Ms. Dilasha, shared her own experience while working from home stating, “I have become a very punctual person because of the respect that I have developed for my time as well as of others. Naturally too, I expect other people to be on time as well. So, on one of the days some of my colleagues were late to a virtual meeting and it bothered me as I had another meeting lined up right after the first one. It was important for me to be on time to the next meeting. When this meeting began late, I felt tense about how I would make it on time for the next meeting. So, instead of clearly communicating with my colleagues about what was up and what got them late, I assertively stated how time management and punctuality is important to grow professionally especially when working in teams.  I talked about how it is important for people to be on time or  at least make it a point to communicate when they aren’t on time.”

Co-incidentally, there was a My Emotions Matter session that Ms. Dilasha attended on the very same day this incident happened. After attending that session, she realized that she had been assertive about her needs but in the process of doing so, it had slipped off her mind to look at her colleagues as humans who might have gotten late because of their own challenges that she was previously unaware of. She stated, “After the session, I held myself accountable for potentially being too hard on my colleagues. I went and asked them why they were late. They explained to me how they were late for the virtual meeting because of poor Internet connection. They were baffled about how to communicate that to me during that instance. After they explained it to me, I could relate with them because the Internet connection isn’t quite reliable here in Nepal.”

But having said all of this, Ms. Dilasha also knew that she had to find an alternative solution so that such a problem wouldn’t occur again. So, she had a conversation with her colleagues and requested them to inform her prior either via call or text if the Internet was not working so that everyone could be on the same page. This helped her mobilize her efforts around a collective goal: to achieve efficiency as a team while working from home but also acknowledge that individuals in teams have their own sets of needs, hopes and concerns and if left unattended, have the capacity to adversely affect the team.

This incident explained by Ms. Dilasha shows how a deliberate shift in mindset on her part helped her balance both her needs as well as the needs of her team members. While being assertive only could have put her in a bad light in front of her colleagues making the organizational culture bitter, balancing assertiveness with empathy helped her maintain an amicable relationship with her colleagues in pursuit of organizational goals.

This example shows how an Outward Mindset can help us save our relationships by helping us see other people as people with their own needs, hopes and concerns. In an inward mindset, we end up blaming by only looking at our side of things but in an outward mindset, both our needs and the needs of others around us are acknowledged. The impact: reduced conflicts and miscommunication in our relationships and increased accountability and trust.

Such has been the impact of the approaches Ms. Dilasha has experienced in our sessions that she highly recommends them to everyone- both individuals as well as organizations. She states, “I was just thinking about how powerful this session on emotional intelligence mindset is. If different professionals, organizations, individuals take this session, we can develop a healthy environment in our society thus helping the relationships flourish. I highly recommend this session to everyone so that people can reflect on themselves and their relationships, both personal and professional. It is great to find that such a resource is available in our city Kathmandu itself!”